Abhayagiri Monastery in Sri Lanka, Anuradhapura established in the second century B.C., by King Valagamabau, during its glorious days, was not only complex of monastic buildings, but also a great seat of learning. Unlike orthodox Mahavihara monastery, Abhayagiri Monastery accommodated the intellectual discussion on various schools of Buddhist thought in addition to Theravada Buddhism, considered as the pure words of Buddha. The center of attraction of the monastery was Abhayagiri stupa, the second tallest stupa at Anuradhapura, also built by King Valagambahu (89-77 BC). 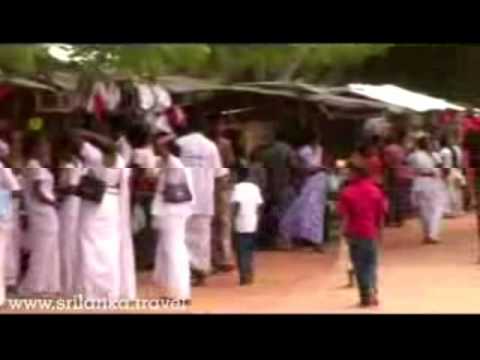 The new museum at Abhayagiri Monastery, a source of valuable information to the tourists, was established in memory of Fa-hsien to house the treasures discovered during the excavations at Abhayagiri Monastery. A large horde of artefacts were unearthed at the monastery during the recent excavations: ornaments and jewellery made of gold and studded with gems and crystals; coins belonging to pre-Christian era; metal objects; moulds and crucibles used in their manufacture; ceramics; pottery; glass; tiles; sculptures etc.

Lankarama Monastery is located to the south of the Abhayagiri Monastery and east of the Bulankulama man-made tank. Lankarama Dagoba, known Mani Somarama meaning “the monastery of Soma” in Sinhalese, was built by King Valagambahu in celebration of the return of Somadevi, who was captured and taken to southern India by the marauding Dravidian Army. Having regained his kingdom from the Dravidian invaders, king secured the release of his queen too. It is believed that Lankarama was the nunnery of the Abhayagiri Monastery.

Lankarama Dagoba is another vatadage (circular relic house) in Sri Lanka: in its days of glory, Lankarama had 88 stone columns, in three concentric circles, surrounding the dagoba that held up a circular roof. Today only a few of the carved stone pillars can be seen around the renovated dagoba. The renovated dagoba measuring 38 feet in diameter is set up on a platform 10feet in height and 132 feet in diameter. Four flights of steps from the cardinal directions take the devotees to the platform 10 feet above the ground level. The four vahalkadas (front entrances doorways) no longer exist. Among the ruins are few damaged Buddha statues and stone tub for washing feet before entering the sacred terrace, the platform. Eth-Pokuna (Sinhala: Elephant Pond), located south-west of the Abhayagiri stupa was built during the third century A.C. A flight of steps from each of the four sides leads down to the rectangular pond measuring 150 meters in length and 50 meters in width and 10 meters in depth. Its cistern sluice (bisokotuwa) and conduit that supplied water to the refectory present another instance of testimony to ancient hydrology of Sri Lanka. Eth-Pokuna is believed to be the largest man-made pond built in the ancient era of Sri Lanka.

Pancavasa or the Five Residences Pancavasa or the Five Residences

Moonstone that serves as a doormat at ancient buildings of Sri Lanka, is a work of art. At Abhayagiri Monastery two exquistely carved moonstones are discovered: one is at Mahasen’s palace also known as Pancavasa building; the other is at Queen’s Palace, just a short distance away. The stone carving on the semi circular doormat is given several interpretations by the scholars. Of these Prof. Senerat Paranavitana’s interpretations is particularly noteworthy.

“The outer motif represents the world on fire that symbolizes desire. The next ring of animals depicts the four states of birth, disease, ageing, and death. Going beyond these sorrows on your path of emancipation there is the creeper and leaves that symbolize the life force. When you surpass this craving you reach the swan representing purification. And the lotus at the center represents Brahma worlds.”

The format of the cravings at various cultural attractions of Sri Lanka isn’t the same: Moonstones at Polonnaruwa is carved also with the image of bull among other symbols. However, in any event, seeing a Moonstone is witnessing masterpiece of sculpture.

Abhayagiri Monastery’s largest building is Ratnaprasada also called Uposathagara of the resident monks. First built by King Kanitthatissa in the second century, it was later enlarged by King Mahinda the second who added several stories and had a golden statue of Buddha erected in it. The Dravidian invasion in the ninth century put the building to fire and sword. The present preserved ruins, monolithic pillars on a stone platform, date to 7-8 centuries while the recent excavation unearthed the ruins of the second century foundation of the Ratnaprasada.

Among the preserved ruins is a guardstone, one of the two guradstones that were originally at Ratnaprasada. It is one of the finest work of art that belongs to the eighth century. The figure of a godking therein is sheltered by an image of five hooded cobra Naga king. On both hands of the godking image are vessels symbolizing prosperity: in the left hand is Pot of Plenty (purnaghata); in his right hand is a bunch of flowers representing Prosperity. At his feet is an image of dwarf (bahirave) figure. The Guard Stone at the inner entrance. Among the preserved ruins is a guardstone, one of the two guradstones that were originally at Ratnaprasada.This is considered the best examples of such carvings in the Anuradhapura Era. The large trough cut in a stone in the shape of a boat used to serve rice to about 5000 monks at the monastery. The smaller trough alongside is believed to be for gruel. Since the Buddhist monks were disciplined to have solid food only before the noon, serving 5000 resident monks at the monastery could have been made easier by the shape of the vessel: monks on either side of the boat could themselves at a pace, in modern buffet style.

Underground conduits had supplied water at the entrance of the refectory for the monks to have their feet washed. The stone tablet at the eastern section of refectory is a replica of the stone tablet that was used for measuring movement of sun. The original stone tablet was shifted to Abhayagiri museum. Abhayagiri Stupa rising to a height of 75 meters is of a diameter of 106 meters. The outer square terrace is strewn with sand while the inner terrace is paved with stone. The premises of the Abhayagiri stupa encompassing the building and two terraces spread over an area of about 6 hectares. The four ponds at the four entrances set in the four cardinal directions were designed to gather the water falling onto the terrace. The twin ponds, exquisite specimen of landscape architecture was belived to have been constructed during the reign of King Aggabodhi the first in the sixth century for the use of resident monks at Abhayagiri Monastery. Both ponds are same in breadth, i.e. 51 feet. The larger pond measures 132ft and the smaller pond measures 91ft in length. A cistern sluice located at the far end of one of the ponds supply water to the twin ponds. The channeled water pours into the pond through a stone cut spout. The perimeters of the twin ponds are molded in stone. Each pond has two flights of steps that lead down from the ground level into the pond from both ends. Two pots of plenty (purnaghata) sit on the pedestal on either side of flight of steps in each pond.