Arankele Monastery in Sri Lanka is a forest monastery with caves that lie at a distance of 117km from Colombo.

Arankele Forest Monastery, an archaeological site, can be reached by the Colombo- Kurunegala– Ibbagamuwa- Moragolla road.

Arankele Monastery in Sri Lanka was a 6th century cave hermitage situated up a forested hillside. The densely wooded terrain crowded with huge hardwood trees are interspersed by the openings and clearings created by the on-going process of clearing scattered debris to unearth the ruins and re-erecting the fallen ruins. 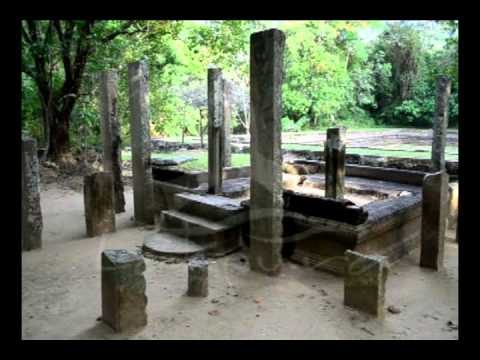 On the slopes of the hill containing Arankele Monastery in Sri Lanka is a cluster of natural rock caves once used by monastic monks for shelter and meditation. Though remain rough outside with the exception of the drip ledges, the interior walls are well plastered with lime.

it was the site of an ancient forest monastery – the austere abode of a sect of recluse monks who had been attracted to this site because of its very isolation and seclusion. The building at the entrance of the Arankele site has been identified as a Jantagara or hot water bath with the dimensions of 100ft in length and 60ft in breadth. There also vestiges of grinding stones which had been used to prepare herbal medicines in the past. Among the other ruins that have been identified are meditating promenades, ponds and long winding pathways.
Long pathways that cut across the dense forest lead to stone carved drip-ledges and caves used for mediation, alms-giving halls and bathing ponds that testify to the excellent works of the craftsmen of that day and age.

Ancient stone slabs of inscriptions in Brahmi script have revealed the existence of meditation halls, stone-faced double platform structures and ambulatories for the austere Buddhist monks living in Arankele Monastery in Sri Lanka. The platforms aligned in east-west axis consist with the entrance porch to the east bridged by a large monolith. The smaller of the double platform structure herein, the roof being supported on columns, has the impression of being divided into cells for the monks. The purpose of the construction of double platforms hasn’t been yet determined though some scholars are of the opinion those were used for meditation, ceremonies and teaching.

In line with the severe simplicity and austere religious practices of Arankele Forest Monastery, the building had been built with no pretensions to decorations. Furthermore stupas, shrines and status found in the ancient urban monasteries aren’t found here either. The exception to the minimalist architecture is the existence of urinal stones decorated with carvings.
The purpose of the practice of decorating urinal stones hasn’t been established.

Arankele Monastery in Sri Lanka is home to the largest hot water pond in Sri Lanka. It is around 100ft in length and 60ft in breadth. Also seen are vestiges of grinding stones that had been used to prepare Ayurvedic medicines. All these ruins now being unearthed testifies to the existence of a large Ayurvedic hospital which was present in the monastery.

For more in depth details on religious places, visit our page on Buddhist sites in Sri Lanka.