Jetavana Monastery at Anuradhapura one of the major Buddhist Monasteries of Sri Lanka was founded by King Mahasena (276-303 AC). His reputation as a builder of great monasteries was somewhat tarnished by his grave misdeeds against the Mahavihara Monastery. Though following his repentance and restoration of Mahavihara Monastery saved the name of the great king in the annals of history of Sri Lanka, today he was remembered as one of the greatest builders of tanks(rainwater reservoirs) of Sri Lanka. Such was the glory of the king following the construction of vast Minneriya tank, the king, following his death, was elevated the statues of deity named ‘Minneriya Deviyo” in the legends of Sri Lanka. 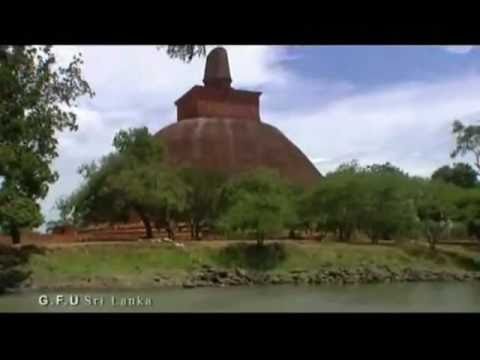 Jetavana Monastery was built in the Nandana Pleasure Garden, where the great Buddhist missionary Thera Mahinda, the son of Emperor Asoka of India, preached the Buddhism for seven consecutive days. Following the historical event the Garden was named “Jotivana” meaning “the place where the holy one made the true doctrine shine forth”. According to the historians, Thera Mahinda was known by the title of Dipajotaka meaning “Light of Lanka”. It is also said that the great monk and his associate monks were cremated herein following their death.The present monastery complex covering an area of 48 hectares was a result of gradual expansion of at least six centuries since its establishment in the 3rd century A.C.

The layout of Jetavana Monastery in Sri Lanka is identical to that of the Abhayagiri monastery though smaller in dimensions. All the components within the monastery too are to a large extent similar to those of Abhayagiri monastery: the stupa, the image house (pilimage), Bo tree Shrine (Bodhigara), the chapter house (uposathagara), the assembly hall (sannipatasala) and the residential complex of the Buddhist monks ( pannasala). The buildings were set up around the stupa in relation to the cardinal points: image house to the west, Bo-tree Shrine (Bodhigara) and chapter house to the south, and the refactery to the east. Around the stupa ran a belt of residential colleges of the monks with the entances to them facing the stupa. The refectory reveals the monastery is home to about 3000 resident Buddhist monks.

Museum at the Jetavana monastery

The museum is of great service revealing the artefacts discovered within the monastery during excavations. The numerous artefacts discovered is of such a volume, today these were called Jetavanana Treasure. Most of the artefacts were found deposited in the thick clay layer between the basal platform and a brick upper platform built during the original construction of the stupa by King Mahasena. The artefacts were dated between second century BC and the last quarter of the third century AC based on the contextual and stylistic grounds.

Among the artefacts displayed at the museum are imported and local ceramics; Roman, Indian and other coins, more than 300,000 beads made of clay, glass, stone, crystal, agate, carnelian, ivory, bone, shell, gold and silver, and also bronze; Buddhist and Hindu ritual objects; slabs of stone with paintings.

Buddhist Railing at the Jetavana monastery

Buddhist railing, a rectangular structure with four entrances, one in the center of each side is located behind the modern Jetavanana museum. The rows of columns within enclosure had once held the superstructure.

Monks’ Living Units or Pancavasa are located south-west of the Jetavanana stupa. The layout is set up in five-in-dice form. The larger building in the center is surrounded four smaller buildings at the four corners. While the senior monk would have lived in the building at the center, other monks would have lived in the other four buildings at the corner. All the five buildings consist of elegant flight of steps adorned with moonstones, guardstones, and balustrades.

Image House (Patimaghara), the largest image house found in Anurdhapura, is located to the west of stupa. It is vaulted image house known as gedige. The eight meter high monolithic door side-posts make way for the twenty-five chamber stone reliquary (yantragala) and the lotus pedestal of the Buddha image. The continuation of this vaulted type image houses are found at Polonnaruwa: Thuparama, Lankatilaka and Tivanka image house.

Refectory or Danasala at the Jetavana monastery

The Refectory is located south-east of the stupa. The Refectory herein is mall that that of Abhayagiri monastery. The stone-paved central courtyard house a large canoe-like trough cut in stone that served rice and a smaller trough that would have served gruel. Judging by the enormity of the rice boat, it could be safely concluded, that the refectory would have been capable of serving 3000 monks at a time.

Chapter House is located south-east of Jetavana Stupa. Hapter house was where the monks performed religious rites, meditated and held discussions on religious texts. The primary task of the Chapter House was to function as an assembly hall so that the monks who breached the code of conduct were allowed to confess enabling the head monks to guide the errant. The massive columns cut in stone testify to the multi-storeyed impressive structure that had existed in its glorious days.

During the fourth century AC, Jetavanana stupa was the third tallest monument in the world, the other two being pyramids at Gizeh, Egypt. At the height of 120 meters Jetavana stupa is tallest brick building ever made. The 19th century British writer James Emerson narrated Jetavanana stupa contained a volume of bricks ‘sufficient to raise eight thousand houses each with twenty feet frontage…line an ordinary Railway tunnel twenty miles long, or form a wall one foot in thickness and ten feet in height, reaching from London to Edinburgh.

The whole sacred area covers about 5.6 hectares that was once surrounded by boundary wall of dressed stone that was 2.4 meters high. The boundary wall with four projections called Vahalkada or front entrances lead to the sand terrace called Valimaluva, an inner retaining wall which had originally carried the four parts of Elephants, and four altars called Ayakas. The stupa is built on raised square platform with flights of steps at the four cardinal points making access to terrace paved with stone. The stupa had undergone renovation by a succession of Sinhalese kings of Sri Lanka. The last king to have the Jetavana stupa renovated was King Parakrabahu the great in the 12th century. Recently it was renovated by the UNESCO-Sri Lanka Cultural Triangle Project.