Kandy is studded with temples. The Sacred Temple of the Tooth (Sri Dalada Maligawa) at the heart of the city is the holiest temple in the world of Theravada Buddhism. The city of Kandy and countryside of Kandy boast of numerous temples and shrines that belong to Kandyan era of Sri Lanka.

Among the most interesting temple are Gadaladeniya, Embekke Devale and Lankathilaka Viharaya located 10km west of Kandy built during the time Kandyan kingdom was ruled from the city of Gampola.To the east of Kandy within 2km are another three important temples: Gangarama Viharaya, Degaldoruwa Viharaya and Galmaduwa Gedige. 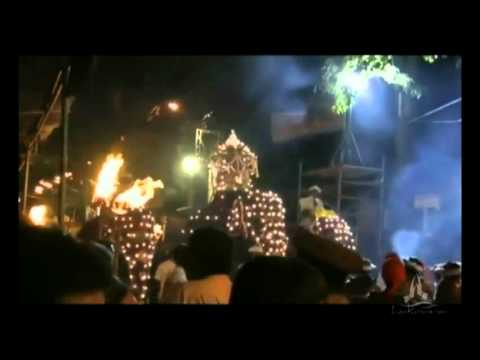 Gadaladeniya Raja Maha Viharaya, Kandy is built on a rock at the village of Gadaladeniya on the border of Udunuwara and Yatinuwara. of Kandy District. Gadaladeniya is a popular village that produces traditional metalwork ornaments of Sri Lanka.

According to an inscription at the site, Gadaladeniya temple was built by King Bhuvenkabahu the 4th in the year 1344 A.D. According to the inscription, the temple was named Dharmakirti Viharaya after the name of the Buddhist monk who founded it. A couple of Buddhist literary works titled “The Nikaya Sangrahaya” and “Saddharmalankaraya” had named the temple “Saddharmatilaka” and “Gadaladeniya Viharaya” respectively.
Gadaladeniya was home to the celebrated scholor monks Daharamakirti the second and Vimakiriti the first whose contributions towards the literary development of the times was of immense value to the nation.
The temple remained neglected till the time of King Narendrasinghe who dedicated the shrine to Velivita Sangharaja and since then the temple was in the custody of his papillary succession.

The main shrine, built upon a rocky outcrop at the top end of the monastery site is of South Indian appearance. It houses a fine seated statue of Buddha framed by a Makara Torana (Sinhala: dragon arch) decorated with numerous images of gods, over it. The images as described in the Gadaladeniya inscription represent the deities Salerea, Brahma, Suyama, Santhusthika, Natha and Maithri. On either side of the main seated statue is a standing statue of Buddha.

In the middle of the temple compound, is a secondary shrine with wings extending in cruciform angles. Each wing is a small Buddha shrine with a sikhara in matching proportions and weight mounted over it surrounding the larger sikhara mounted on the hub of the wings.

Embekke Devale shrine is located in the village of Embekke close to Daulgala of Udunuwara division, about eight miles from Kandy.

The vahalkada or the entrance porch of the devale also has 16 wooden pillars with some of the finest wood carvings, including a carving of a “mother and child”.

The roof of the shrine is of great significance. The roof without a central beam, holds together 26 rafters of the roof by means of Madol Kurupuwa, a giant wooden pin, a fine example of medieval carpentry. The ingenious example of classic carpentry resembles spokes in the wheel of a cart. The giant pin is carved too with traditional designs.

Embekke Devale is the finest living example of architecture and art in wood in Sri Lanka. Embekke Devale
It’s treasure trove of. Almost every inch of the wooden structures are decorated with elaborate carvings: rafters, beams columns, brackets, door-ways, doors and windows. Nothing is spared.

The main sanctum having high roofs runs with the traditional design of Devale shrines of the Kandyan period. The roof itself has singular features. The rafters are slanting from above towards the incoming visitor and are caught together and kept in position by a “madol kurupawa”, a kind of giant catch-pin the like of which we do not have elsewhere.

The digge set up with 32 square-shaped pillars is 53 feet long and 26 feet wide. Most of these intricately carved wooden pillars have stone pillars as their base. The digge is decorated with no less than 128 designs and 256 floral designs, 64 lotus designs on pekada or brackeys, 30 on beams and 36 on cross-bars totaling 514 in all.

The Hewisi Mandapaya Drummers’ hall is of high-pitched roof wood carvings on its ornate pillars. An abandoned Royal Audience Hall at Gampola was the source of some of the woodworks at the Drummers’ hall.

Lankatilake Viharyais located at Handessa, 12km from the Peradeniya bridge in Kandy district.

Lankatilake Viharya built on the summit of a rock called Panhalgala provides a magnificent panoramic view of the surrounding hills, paddy fields and the diverse vegetation around it. On the temple premises are the shrine, stupa and a Bodhi tree.

The temple has the same name as the well-known construction of Parakramabahu I at Polonnaruwa. This is a religious devotion of Senalankadhikara, a minister of Bhuvanaikabahu IV of Gampola in 1344 CE. Further establishments in the form of stucco work carried out by the King, Parakramabahu VI of Kotte (1412-1467 CE). The building was four storeyed during its glorious days. However, today there is only the ground floor and a part of the first floor.

Lankatilake Viharya is built of brick and granite on an uneven rock surface with a cruciform ground plan. The square sanctuary is ringed by an outer casing wall leaving a circumambulatory space alone three sides. In the words of Dr. Senerath Paranavitana, the architecture is “essentially a continuation and development of the Sinhalese architecture of the Polonnaruwa period with some Dravidian and Indo-Chinese features”.

A flight of stairs cut into the rock surface of the premises leads to the main entrance of the temple. On either side of the entrance are gajasimhas (Elephant-lion) sculptures. Then an arched passage with Makara Torana (Dragon Arch) on the exterior wall, well decorated carved with Gandharva and Gaja-Lakshmi leads to pavilion and through it to an inner chamber. The 24 Buddhas that preceded Gautama Buddha are exquisitely painted on the walls and ceiling. In a chamber is a colossal statue of seated Buddha under a beautiful dragon arch. Images of deities Upulvan, Saman and Vibhisana occupy the niches on the south, west and north respectively. The deity Skanda is accommodated to the north of entrance separated by a wall.

Location
Degaldoruwa Viharaya is located at the village of Amunugama, 7km from Kandy.

Degaldoruwa Viharaya is set up on terrace of a low rocky outcrop into another rock mass rising to a height of 40 feet. Alongside the temple is an impressive belfry. The main chamber is created by creating a large cavity under a large granite rock A path carved of rock leads to a higher terrace where the Bo tree and the stupa is located.

Degaldoruwa Viharaya is a Cave Temple with Kandyan era Paintings and Architecture. The arch at the entrance painted in white is in sharp contrast with the murals. The rock cut chamber consists of two roofed antechambers: a drumming hall and an intermediate vestibule. Degaldoruwa Viharaya is a treasure trove of murals: the rock walls and ceilng are recognized as some of the best examples of the Kandyan era paintings.

The murals on the wall separating the vestibule from the inner chamber and on the natural rock ceiling are portrayed as continuous stories. These paintings are divided into four panels. These pintings illustrate of four stories from the previous births of Buddha called “Jataka stories”. Four Jataka stories illustrated herein are the Sutasoma Jataka, the Vessantara Jataka, and the Silava Jataka. Of all these works of enchating paintings, Vessantara jataka is the most expreesive panal of murals.

A siginificant feature of the paintings that draws the attnetion is that the figures are of unifrm size: humans, animals, trees and everything else, more or less are of niform size. The trees are drawn in a stylized: branches and leaves spread on either side or any other again in uniform size. Another significant feature is that the rear views of human figures aren’t drawn at all: invariable the front view or the side view is presented at all times. A stream is brought into the illustration with a school of fish swimming.

The most dramatic mural composition is the great panel on the ceiling depicting the Mara Yuddha or an intrepetation of Buddha’s spiritual conquest over all evil:“In the centre of the panel the Buddha appears, calm and unperturbed, his radiant nimbus around him. He sits on his jeweled throne under the Bodhi tree, in bhumisparsa mudra, the earth touching attitude, calling the earth to testify on his behalf against Mara. The earth’s reply is made explicit in the form of the ‘Earth woman’, the Mahikanta, emerging from below, bearing a pot of plenty and holding up her right hand in testimony. On the Buddha’s left we see a many armed Mara mounted on his war elephant, leading his army of demons into battle. To the right at the base of the throne, the evil god is thrown off his elephant, in abject defeat. Surmounting the entire scene, on a level with the upper branches of Bodhi tree, are ranks of devas, in a lotus – strewn backdrop, gods very different in character from the demons below.”