Nagadeepa (Nagadipa) or Nainativu is one of the islands belonging to the cluster of islands in the Palk Bay off the Jaffna Peninsula.

The Jaffna city is located 404 km north of Colombo in the northernmost Peninsula of Sri Lanka and can be reached via the A3 main road that is then linked to the main northern A9 motor road. 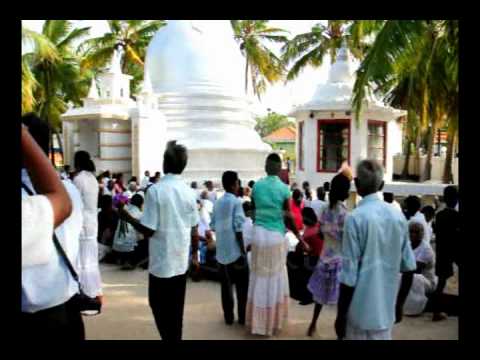 The sandy island of Nagadeepa, sheltered by Coconut palm groves as well as Palmyrah palm trees, features two main jetties set apart by a distance of no more than 300 meters. One of the jetties brings into the immediate vicinity, the Hindu Kovil at the beach while the other leads straight to the Nagadeepa Viharaya, which is also of close proximity of the beach. The boats reaching the island opt for either of the two depending on the passengers brought in from Jaffna: should there be more Hindus, it will be moored to the jetty close to the Hindu Kovil; should there be more Buddhist passengers, the boat would be moored to the jetty closer to the Buddhist temple.

The stretch of beach between the Buddhist Temple and Hindu Kovil

Along the motor-able coastal road that runs past the Hindu Kovil and Buddhist Temple is a string of stalls that has formed a mini bazaar stretching for about a hundred meters between the two shrines. The population of the island is approximately 2,500 Sri Lankan Tamils and about 250 Muslims, while the island is visited by thousands of Sinhalese Buddhists on pilgrimage to the Buddhist temple, which is considered as one of the 16 holiest Buddhist Sites in Sri Lanka by virtue of being a location Buddha had visited in the 6th century B.C.

Nagadipa or Naka-diva is first mentioned in the Pali chronicles of Ceylon in connection with the story of the Buddha’s second visit to Sri Lanka in the 6th century B.C. According to the Mahavamsa (ch.1.vv 44-70) the Buddha, during this visit pacified two Naga kings of Nagadipa who were arrayed in battle over a gem-set throne. In the ancient chronicles the pre-historic Naga tribes are represented as non-human beings enriched with an advanced civilization.

The ancient temple encompasses the image houses and the stupa in which the gem-set throne was enshrined before it was destroyed. The Buddhist temple therein is a modern one and unlike the thousands of other stupas in the country, the modern Nagadeepa stupa is painted in silver in an attempt to protect its limestone structure from the relentless sea-wind. There are two shrine rooms at the premises: behind the stupa is the main shrine room while the smaller shrine room features a bronze Buddha statue.

According to resources, it is here, that Buddha on his second visit to Sri Lanka preached his sermon on reconciliation. Two Naga Kings, called Mahodasa (Nagadipa) and Kulodasa (Kelaniya) had been fighting for the simmasanam (throne) for several years. When Buddha came to Nagadipa he settled the dispute by his preaching. The kings then offered the throne to the Buddha as a gift and built the dagoba which is venerated until now by many devotees.

From the jetty, you can walk south along the main road for about 10 minutes, turning left at the Hindu kovil. The temple will be on to your right. On to your left, on the seaside is a Bo Tree.

This temple is situated on a small 10 km long islet which was once a sea port frequented by ships. An inscription from a twelfth century stone discovered on the site testifies to this fact. The annual festival is held in June/July while by the seashore is a ghat (flight of steps) which is used by the many thousands who attend the festivities.

Legend has it that a temple was built at the Naga Shrine by a trader who received Ambal’s blessing when sailing by the island. The temple was demolished in the sixteenth century by the Portuguese but it is said that the Nageswari Ambal Statue was kept hidden in a tree. It is then recorded that ‘Ramalingar Ramachandirar’ rebuilt the temple in 1788 and it was later renovated and a gopuram (ornate tower) was added in 1935. The statue of the Naga deity kept in the sanctum is said to be very ancient. The followers who worship here seek the blessings of the Goddess Ambal Devi for the well-being of their offspring and for this reason many parents bring their new-born to the site.

About 200 meters north of ‘Naaga Pooshani Amman’ Hindu kovil is the beach. 300 meters into the sea from the beach, when you wade nearly waist high in to the waters (in low tide) is an old anchor and a large stone inscription of King Parakramabahu the Great (1164-1196 AD) of Sri Lanka.

In the inscription the great king had stipulated that all entering Nagadeepa should first enter Uraturai (Kayts) and secure help if required. This undoubtedly refers to merchants and pilgrims from India. The inscription also advises of the measures that should be taken in the event that the ships carrying Elephants or horses and other merchant ships are wrecked. The ancient anchor is made of stone. The ships of the Arabs had carried such stone anchors in the early years of trading.