Situated in the district of Ampara, Approximately 314 km from Colombo, Arugam Bay is Known as one of the best three surfing spots in the world. this typical fishing village to the south of the small town of Pottuvil can be reached via A4 from Colombo. The unspoilt town of Srugam Bay offers an abundance of opportunities for those with a passion for water sports and underwater photography

Sri Lanka Windsurfing is a popular water sport among the foreign tourists who visit the palm fringed pristine beaches of Sri Lanka. The most popular surfing beaches of the island are Hikkaduwa of South Western coastal belt and Arugam bay (International surfing competition venue) of Eastern coastal belt of Sri Lanka. Since the early 60’s Sri Lanka attracts surfers from all over the world. The Windsurfing opportunities offered in Sri Lanka attracts the amateur windsurfers as well as the world class Windsurfers participating in international Windsurfing competitions.

The resplendent waters surrounding the moon-shaped curl of soft golden sand in the eastern shores of Sri Lanka are known to be one of the best ‘point brakes’ in the world. Experience and ride through the majestic waves of the ocean as they break in an exhilarating rush. Surfing is best in Arugam bay during the season of April to October each year. During this time is conducted the UK Pro-Surfers Association’s Sri Lanka Surf Championships, an event open to all and where the entire place becomes a hub of activity as the best Surfers across the seas comes together to participate in the thrilling event in one of the finest Surfing hotspots in the world.

Arugam bay is situated on the Indian Ocean in the dry zone of Sri Lanka’s South-East coast. The Bay is located 220 km due East of Colombo. It is a popular surfing and tourist destination. Many of the buildings were destroyed in the 2004 tsunami.Due to its popularity among tourists thearea has managed a slow recovery by private initiatives only.The main road through town has not been repaved yet.By April,2008 no help has been received from any official source or International organizations. An exception is uncoordinated support for fishing folk as well as many school rebuilding programs, sadly resulting in a continuation to provide only separatist schools for each Community

He Bay hosts a large fleet of fishing boats which operate off the beach. Many organizations donated boats after the tsunami andas sa result there are far more fishing boats than ever before.The main beach is bit dirty as it is used as a garbage dump and a toilet by some locals.Nearby beaches are more esthetically pleasing and also have excellent waves. Surfing in Arugam Bay Point has a very long, consistent, sectiony right hand break.Many organizations claim to ha ve done extensive work in the area, but locally and on close inspection no progress can be observed so far, end first quarter, 2008.US ‘Mercy Corps’ has been the most active organization, funded by Oprah Whinfrey ‘Angel Network’, following a huge fund-raising TV series in the States.Sadly, none of their projects survived the first year of operation.A bridge survived the first year of operation. A bridges being constructed by USAID to replace the old, original landmark box girder construction linking Arugam Bay with PottuVille town. There is excellent elephant viewing nearby as well as two types of monkeys wandering around the area.

Arugam bay is far away! 7 hours drive from Colombo, it has until fairly recently only attracted a tthts. There are now almost dayly flights to Ampara with Sri Lankan Airlines sea planes. They are presntly applying for a licence to land on Pottuvil Lagoon. The ISA (International Surfing Association) staged Arugam bay‘s first international surfing competition in the summer of 2004, and despite the shocking destruction of the Tsunami, returned again in 2005 to give the battered local economy a boost. 2005 was a difficult year for Arugam bay as it was one of the worst hit areas of the country. The post Tsunami recovery has by and large been very quick despite the remoteness of the area. many NGO’s and private organisations like ourselves (LankaRealAid) have help rebuild the area and some of the guest houses are now much better than before the wave. Both north and south of Arugam bay there are undoubtedly some of the most beautiful beaches in the whole of Sri Lanka.

Arugam bay is on the list of the top ten surf points in the world. Situated on the South East side of Sri Lanka Arugam bay receives the same Antarctic winter swell’s that hit Indonesia in the in the middle of the year. The best time of the year is between May and November when the predominant wind is offshore for at least the first half of the day. Due to its location and southerly swell direction the area is dominated by right hand point breaks. There is a beach break in front of the Stardust Hotel, which can be fun for body surfing or for beginners but that’s about it. Three of the point breaks “The Point”, “Pottuvil Point” and “Crocodile Rock” are within a hour tuk tuk ride from the Hotel, with “The Point being visible (15 min walk) from the hotel. There are several other points that are within a 1-hour’s ride or can be accessed by boat. Some of the staff at the hotel surf and are only to happy to help you plan surf trips to some of these lesser known breaks

The Point: This is the main break at Arugam bay. The point is a long right-hand point/reef break that breaks at the headland in front of Arugam bay. It is also the best swell magnet of all the points and you can almost always guarantee that the The Point will be a couple of feet bigger than any of the other breaks. It breaks from anything between 2 and 6 feet but tends to max out after 6 foot. Due to its location it is also attracts the biggest crowd but seems to be handle it as it often sections in a few spots. On a good day it provides a clean rideble wall that will barrel in the sections and give you a 400-meter ride right through to the inside. When you ride all the way through the best option is to paddle a few yards to the beach and walk back out to the entry point (booties are advisable as the reef starts from ankle depth). There is also cafï¿½run by some of the locals that provides a grant vantage point to watch the action from and take in stock up on energy for the next session.

Pottuvil Point: Pottuvil Point is every surfers dream tropical wave. A long deserted sandy beach doted with some huge boulders at the waters edge, make this wave a favourite with some of the season veterans. Less crowded because of the hour tuk tuk ride north from Arugam bay, Pottuvil point provides 800 meter rides from the outside section right through to the beach on the inside. The unique thing about this wave is that for most of it you can be working a four foot face and be only a few meters from the beach as the wave grinds down the sandy point. The outside section sucks up and throw’s out as the swell raps into the point giving a 30 meter wall to work with before it fades as it hits deeper water for about 10 seconds. The wave then tends to double up as it hits a shallow sand bottom section that will have you hanging in there for all you worth just to try and make the next 40 to 80 meter section. Failure can leave you standing in knee deep water with a mouth full of sand if you manage not to get slammed into one of the boulder’s first.If conditions are right and you can make it through this section then the wave peels perfectly meters from the beach for an eternity until it closes out in the bay and you begin the long walk back. Pottuvil Point needs a decent size swell before it starts working at all and a large swell before the middle section.

April – October Is the Best Season For Surfing In Arugambay 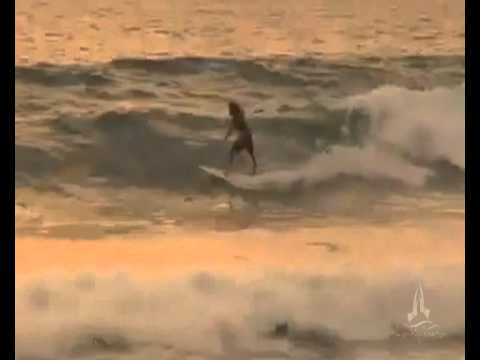